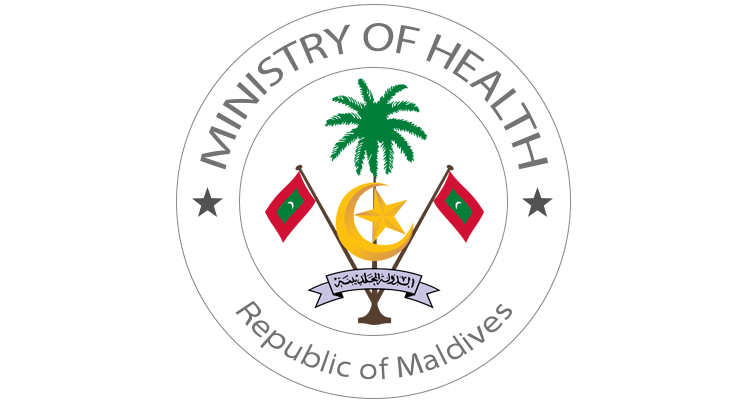 A country of 1192 islands, out of that having 400 in average is inhabited and others are un- inhabitantsmostly jungle and sand banks. Those 400 habitat island having minimum health facilities provided by government through MINISTRY OF HEALTH, FAMILY AND GENDER
( RECENT FORMER MINISTRY OF HEALTH) Other than government facilities assuring by local treatments ( like; Aurveda, Sanatan, Kobrezi, Magic tricks etc. As like other Asian and non- Asian countries)

As said before country consists of 1192 islands, these are under Atolls (about 26) and these are under 7 Provinces. Out of most habitat islands having HEALTH CENTER ( 8/16/24 hours)- and having 1 to 2 doctors ( Depending upon population of island), these health centers fully controlled by ATOLL HOSPITAL ( 24 hours hospital, secondary level, 4-8 MEDICAL OFFICERS, 1-4 SPECIALIST DOCTORS), Atoll hospitals are may or may not be controlled by REGIONAL HOSPITALS ( 24 Hours hospital, 6-12 MO, 3-8 SPECIALISTS- Semi Tertiary level). The one and only Tertiary level hospital is INDIRA GANDHI MEMORIAL HOSPITAL (Semi Government), situated in Male city; the capital of Maldives.

Most of the doctors in Maldives are recruited from nearby overseas countries through agencies
( about 95%). Presently, Medical officers are from- India, Pakistan, Bangladesh, Nepal, Egypt, Ukraine and Russia. Specialists are more or less from same countries.

There are very few namely recruiting agencies are taking this workload to provide health facilities in Maldives. The most popular name among all doctors and definitely in Ministry is Mr. Kadir and Ms. Neero, other than this there are some overseas agencies are working by linking with Maldivian agencies. No doubt it is a chain link. In ease, Overseas country agencies posting advertisement in online news portals/ Daily news papers etc. After getting doctors he or she should have to pay at least 3000 USD amount of money, including air fare. Now let’s see how this money will be expenditure? The overseas agent will send the doctor to Maldives, In airport; the local agent will pick the doctor, most of the cases sufferer doctor have to pay 800- 1500 USD amount of money to local agent ( which is provided by Overseas agent), no doubt this amount is belong to local agent and some HEADS. On the very next day local agent will take the doctor to ministry and to hospital for official work and health check up respectively.

Definitely, ongoing recruited physician will amaze when by seeing his / her own signed offer letter and contract paper is different, as per offer letter and overseas agent document says for 2 years of contract but in paper says for 6 months ( for new doctor and 1 year for the doctors who came before 2016). Moreover, director of ministry or some official will inform- “ you have to sit in exam and have to pass this to secure your REGISTRATION AND LICENSE, you will get 3 chances to clear up and no excuse for this, if you continue your job without LICENSE, for each day you will be fined 3,400 USD amount of money and definitely you will be AUTO TERMINATE”!!!- Just figure out some mathematical equation now.

(Note that: in exam period, a doctor have to pay 200 USD for fees and for 5-7 days staying without Daily allowance in capital and have to drain 100 USD for per day for food and living for per person.)
According to present situations, there are about 200 Medical officers are going to lose their job due to the negligence of Agencies, Ministries and MMDC ( Maldivian Medical and Dental Council).

♦About salary :
A medical officer can get 1000 USD for basic, 200 USD for living, 120 USD for food and 19 USD per day for service allowance. Other than work duty can get over time.

Regarding over time, it is totally confusing matter- OT depends upon island population, managers good willing ( no doubt buttering may helpful here!). Small health centers are open for 6 hours a day for 5 days. Some are for 7/8 hours for 5/6 days. A posted doctor bound to work 48hrs/ week. So, leftover time is cutting from OT! Although it is not fault of the posted doctors. Other than this, if there is no patient coming in holidays there will be no service allowance whether in 24 hrs. On call.

About service allowance, if any doctor become sick/ need for family responsibility leave he can not get any daily allowance. (Although according to Civil Service rules of Maldives says different things, note that; One can get fixed service allowance in case of sick leave and family responsibility leave according to civil service rules- which is strictly followed by locals, not for the expacts! – in contract is written also the same thing)So, it’s very difficult to get benefits when a doctor become sick or on family matter leave.

The electric bill is doubled for the expects in business/ fully rental purpose homes, it’s become tighten over neck when they are going to implement 3% tax for expects from October, 2016. That means, no tax pay salary benefit like some other gulf countries and European countries.Although you have to pay from the beginning in every single purchase for about 6% GST. So, it is easily calculate that, you have to pay about 9% from October other than service charge to feed your family in home country for money sending purpose! (note that, USD is getting expensive day by day with high cost)- No doubt it will be getting bad effect to poor workers coming from Bangladesh/ SriLanka/ India after expenditure of 3500USD of money per se.

One thing is good that you can get the salary within first week of the month and sometimes before ending but not for the poor worker.

MALDIVES MEDICAL & DENTAL COUNCIL ( MMDC) Is Peeling The Skin Of Doctors and Other side MINISTRY OF HEALTH, Maldives Is Giving New Job Circular- Urgently Needed 15 Medical Officers Who Can Able To Join Within September 8, 2016. Funny & Shameful.

Recently MMDC Announced To Seat For Exam To All Doctors Working In Maldives To Renew Their Provisional Registration & License Although It Was Not The Written Part Of contracts Of Individual Doctors.
By This Way They Are Terminating Skilled Bangladeshi Doctors From Maldives Although MMDC Don’t Know How To Commence Exam And Their Proposed Exam Question Distributions Totally Irrevalant To The Maldivian Populations Disease Conditions.

Its Reflecting A Negative Impression In Ours Doctors Mentality To Treat Patients There Until They Are Staying There.
Hope Very Soon MMDC Will Change Their New Rules And Will Implement An Ethical Propaganda To Assure The Better Health Care Facilities In Maldives By Bangladeshi Doctors.——————–By Bangladesh Community in Maldives.

“ Doctors are terminating nowadays promptly and sometimes definite cause and notice, transferring another islands as well with bag and baggage within an hour of notices and sending him or her own country by saying “ auto termination” – just to ignore giving the last month salary and air fare!!!”- reported by a sufferer.

“ Once I applied for annual leave about a month ago before the date of leave, from hospital management denied that application and threatened about leave, although I have maintained all the procedures according to contract, when asked for reason, management told all about ministry”, said by another.

“ A country who don’t have any medical colleges and their students are studying and passing medical degrees from recruiting countries, how can they doing like this?” said another correspondent.

It is noted that MMDC and Ministry are going to recruit 100 Pakistani origin doctor who are supposed to be contract for a year and salaried by Pakistani government, says- PAKISTAN OBSERVER ( June, 28- 2016) 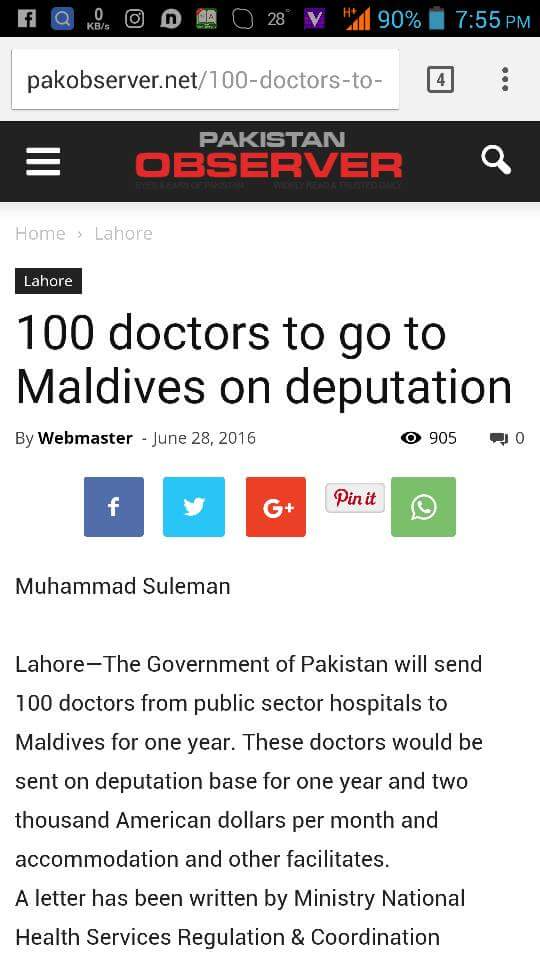 From Bangladesh, India and Pakistan lots of agencies are working to recruit or better say trafficking of doctors to Maldives, other than that some doctors who presently working in Maldives are recruiting by collaborating with local agents. Some agencies named- J & S INTERNATIONAL, 4 R4 INTERNATIONAL, ALFA INTERNATIONAL, VISA LAWYEAR PK etc- Reported by various doctors in different nationalities in Maldives.

After reported and gathering from various news and cites from different expact doctors and from different health centers, Atoll and regional hospitals all are feeling continuous pressure and ambience fear of losing job. According to present situation, all wished to overcome from the present situation by changing following rules:

A. The doctors who already working here, will not appear in exam up to DEC, 2017. ( but there will be chance to sit exam for working beyond 2017 by achieving Temporary registration before Dec 2017, if no pass means holding Prov. Regi.)
B. The new comers’ contract should written for exam issue which will be mentioned in offer letter.
C. Exam should be held in Atoll hospital or Regional hospital, either computerized or written MCQ.or Online….same time and date.
D. The syllabus/ Marking system already published need to modify a lot.
E. Only there will be clinical part of exam like other countries.
F. There should be open exam center in recruiting country or MMDC will be under Prometric exam.
G. Exam fees should be below 150 USD.
H. If conducting exam in Male city, MOH must be provide Daily allowance and Living allowance as well as minimum transport fees.
I. There should be supporting links or books to study to cover the syllabus.
J. If any doctor not passing in 2017 to avail Temporary Regi. He will leave this country and can not practice with Prov. Regi. in this case MOH will bear full responsibilities for air fair and A month of Basic Salary in Jan, 2018. K. A candidate can appear in exam max 5 times; by this time if not passing means he can hold Prov. Regi. (up to 2017, Dec.)

1. Over Time:
It is seen that due to government holidays some of health centers are not opening in Friday and Satardays. In this case MOH should have to take actions regarding overtimes to clear up 48 hours a week schedule, as written in Contract.
A. Beyond 48 hours all doctors will get Over Time, in workdays( 1.25 of basic) as well as weekends ( 1.5 of basic)
B. Over time whether HC will open or not.
C. in contract should be written regarding this.

4. THE CONTRACT PAPER SHOULD BE REVISED
5. THE RELATION AND COMMUNICATION IN BETWEEN HC VIA ATOLL VIA REGIONAL VIA MINISTRY VIA MMDC SHOULD BE SYNCHRONIZE.
6. IF ANY DOCTOR BECOME JEOPERDIZE BY LOCAL, MINISTRY WILL TAKE THE FULL RESPONSIBILITY FOR THE DOCTOR AND MINIMISE THE OUTCOME.

Last but not least, A common request came from all- hope, the High Commissions of the diseased physicians will take a good step by taking responsible measures through Maldivian government for better outcome of the present situations. 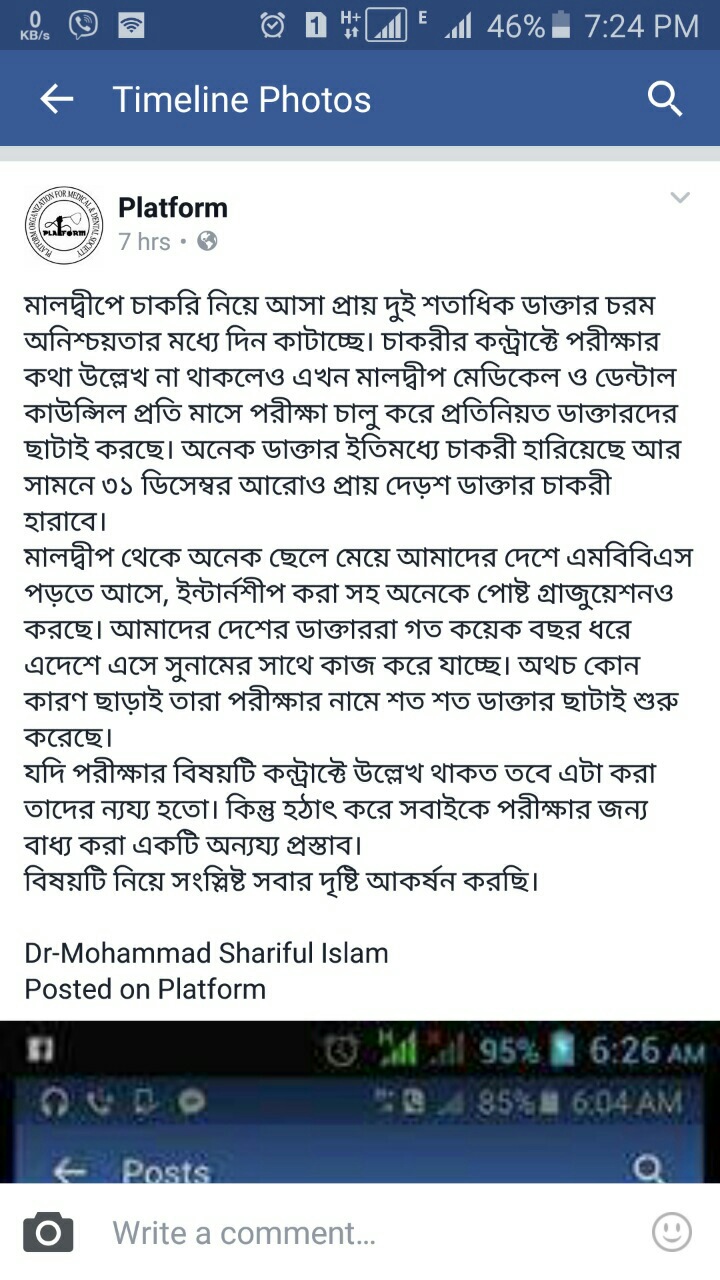 4 thoughts on “Doctor Migration to Maldives :know before joining”

Thu Sep 8 , 2016
Practical Diagnosis and Management (PDM) is a practical, point-of-care free offline mobile app that offers clinical information on the diagnosis and treatment of most common medical disorders seen in both general practice and hospital settings. PDM is developed by ITmedicus who are the creators of DIMS which is another very […] 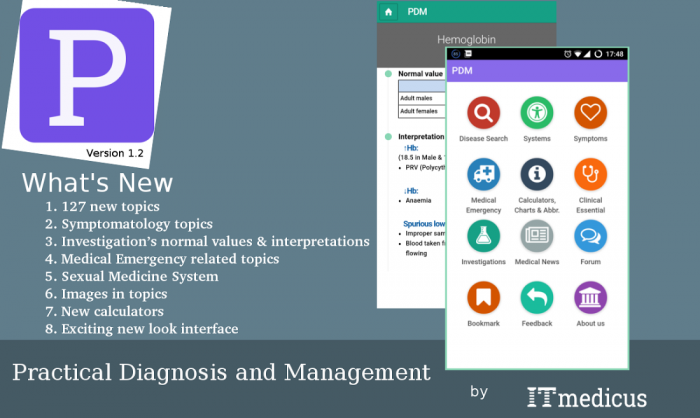